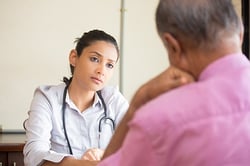 We estimate how often adult smokers are advised to quit using a nationally representative sample of adults in the United States.

Data are from the 2012-2013 household component of the United States (US) Medical Expenditures Panel Survey (MEPS).

Current smoking and advice to quit offered by providers.

Smoking cessation advice is given to less than half of current cigarette smokers and it is least likely to be given to the most vulnerable populations. Efforts to reduce smoking are deployed less often than other preventive practices. The rate of advice to quit has not changed over the last decade. Health care providers are missing an important opportunity to affect health behaviors and outcomes.