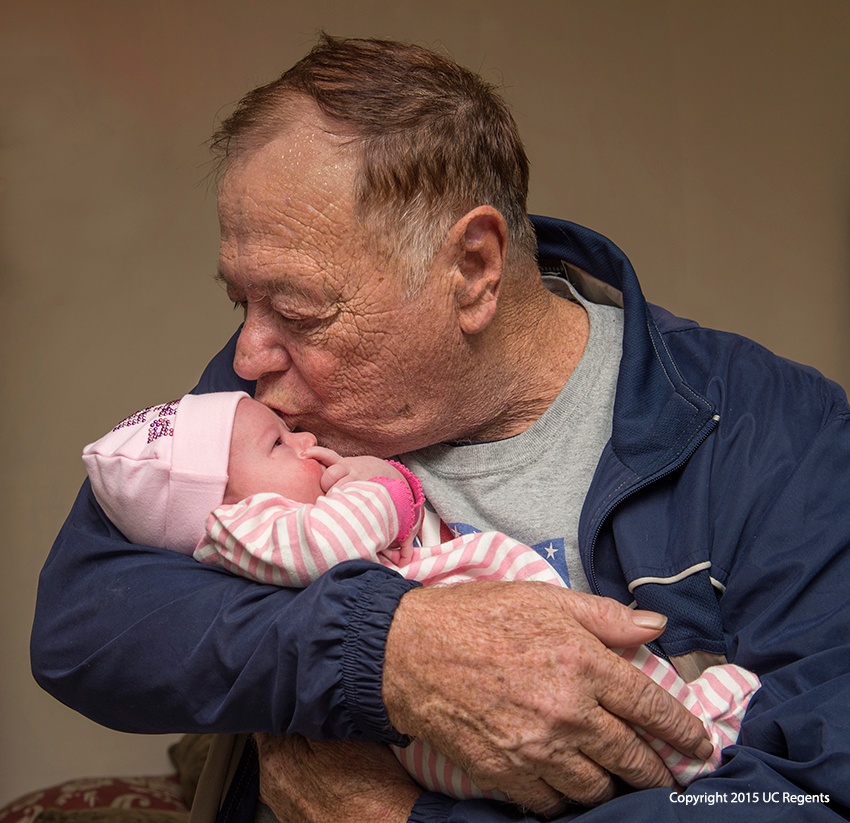 Buster Halcomb was just 5, a scruffy shoeshine boy in a billiard hall in Cumberland, Ky., when three men approached with packs of “tailor-made” cigarettes.

“Bring them home to your mom and dad,” they told him. He did, and kept a few for himself, too. By age 7, smoking had become a habit, one that the now 66-year-old is ready to quit on account of his own health and for the sake of his new granddaughter.

“I love that baby even before she is born,” he gushed on the day his daughter went into labor. “I know that if I smell like smoke, I am not going to be holding her.”

Halcomb, along with his wife, Julia, plan to quit smoking together with the help of UC Quits, a University of California program that marries established tobacco cessation counseling with the electronic health records of every patient who gets care at the academic health center at UC Davis, UC San Diego, UCLA, UC Irvine or UCSF.

The program aims to simplify and streamline what should be routine preventive health care, but too often is neglected by providers. It began as a pilot project at UC Davis through a grant from the UC’s Center for Health Quality and Innovation and led by UC Davis internal medicine physician and tobacco control researcher Elisa Tong. The university later expanded the program across the entire system.

The idea is to reach people at risk of tobacco-related diseases when they are more open to quitting – in the hospital or during doctor visits. Project leaders estimate that at least 100,000 people who get their care at a UC center can directly benefit; already, 2,700 patients who smoke have been referred to the California Smokers Helpline, operated by UC San Diego.

After several unsuccessful quit attempts, Halcomb acknowledged that his doctor’s recommendation in mid-December came at a good time – just hours before his daughter gave birth and brought her new baby to her parents’ home to live.

“Everybody who smokes knows that if the doctor says something, deep down they feel ashamed,” he said.

The UC Tobacco Cessation Network also is designed to meet federal and other health care targets for improving patient outcomes and lowering the costs of care.

“The goal is to try to address tobacco use at every clinical encounter, and ultimately align with tobacco quality measures set forth by the Centers for Medicaid and Medicare Services, which will probably offer incentives to health systems based on how they are performing on tobacco,” said Tong.

The health impacts of smoking are indisputable: Tobacco use is a leading cause of preventable illness in the U.S., including cardiovascular disease and several types of cancer. By the same token, quitting can have immediate and long-term health benefits. But nicotine is an addictive drug, and most smokers attempt to quit several times before they’re successful.

Health care provider involvement increases the chances that someone will quit, explained Linda Sarna, interim dean of the UCLA School of Nursing and a UC Quits nurse champion.

“The majority wants to quit, and those with an illness may be even more motivated,” she said. “When a provider has an interaction with a patient who smokes it’s an opportunity to connect the dots and help the patient understand how their condition is influenced by tobacco use.”

A critical component of the program is training providers. Sarna, for example, has worked with nurses at all the UC campuses to understand their role in supporting quit efforts, including strategies to help smokers suffering nicotine withdrawal.

In addition, the Smoking Cessation Leadership Center, run by UCSF Distinguished Professor of Health and Healthcare Steve Schroeder, coordinated education materials to ensure providers know how to flag smokers in the hospital or clinic, inform patients about the benefits of quitting and how to do it. At UC Davis, for example, Halcomb was given a prescription for nicotine patches and tobacco lozenges.

Health care providers now can “e-refer” patients to the Helpline. The referral triggers a call to the patient from a trained counselor, said Helpline Project Director Chris Anderson, whose team worked across the UC health centers to connect the Helpline to electronic health record systems and integrate the referral capability into clinical workflows.

Offered in English, Spanish, Mandarin, Cantonese, Korean and Vietnamese, the counseling can involve up to six sessions spread over the course of a quit attempt, from a routine intake survey to a quitting preparation conversation and relapse prevention sessions.

Anderson said UC Quits’ long-term goal is to screen patients at every clinical visit, “so the patient who doesn’t quit this time gets encouraged to do so next time.”

Halcomb said he and his wife are ready this time.

“Smoking is not the way to go,” he said. “Life is too short to mangle it up. And we want to see our grandchildren grow up.”