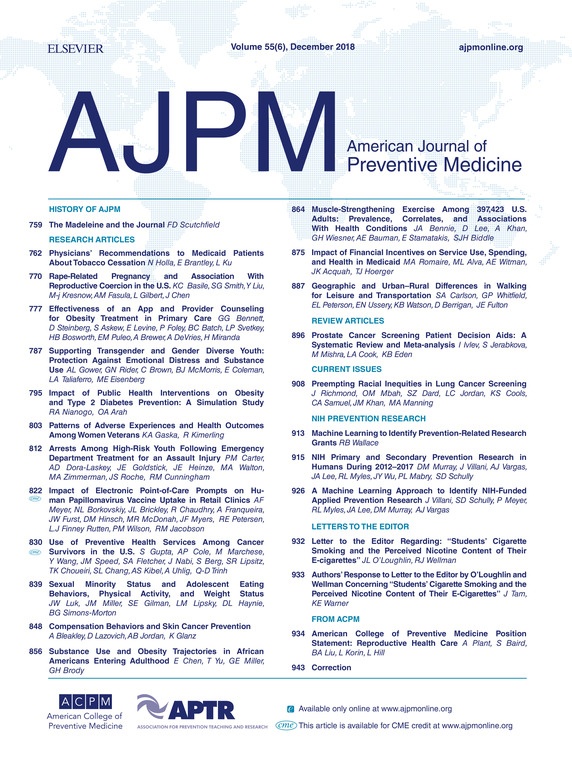 Ann Arbor, November 16, 2018 – New research shows improved smoking cessation outcomes can be achieved within the Medi-Cal (California’s Medicaid program) population by supplementing telephone counseling with access to nicotine-replacement patches and moderate financial incentives that are not contingent on outcomes. The group that received these additional services was more likely to make a quit attempt and remain smoke-free, both short- and long-term. This study also adds to the evidence that modest financial incentives can be an effective smoking cessation intervention for a low-income population.

This research was published in a special supplement to the American Journal of Preventive Medicine, guest edited by Steven A. Schroeder, MD, Department of Medicine, Smoking Cessation Leadership Center, University of California, San Francisco, CA, USA, which describes components of California’s Medi-Cal Incentives to Quit Smoking (MIQS) Project, its successes, and ongoing initiatives.

In a study of statewide outreach for the MIQS Project, led by Elisa K. Tong, MD, of the Department of Internal Medicine, University of California, Davis, Sacramento, CA, USA, promotion through health care channels increased the utilization and reach of quitline services to maximum levels. “Healthcare channels were an important referral source, as more Medi-Cal callers than non-Medi-Cal callers cited providers and plans rather than media,” Dr. Tong observed. “MIQS may be sustained with coordination and prioritization across plans, providers, and public health partners.”

Researchers conducted a randomized controlled trial to assess which approach was most helpful in getting Medicaid smokers to quit. They randomly assigned participants to one of three groups: usual care, consisting of smoker quitline counseling and assistance in obtaining quitting aids through Medicaid; usual care plus nicotine patches mailed directly to participants’ homes, and usual care plus mailed patches and financial incentives of up to $60 per person. Compared to usual care, people offered nicotine patches and financial incentives were more likely to:

Medicaid expanded eligibility under the 2010 Affordable Care Act, increasing the population of smokers on Medi-Cal. An analysis of datasets from the California Health Interview Survey led by Shu-Hong Zhu, PhD, of the Department of Family Medicine and Public Health, University of California, San Diego, CA, USA, showed that between 2012 and 2016, the number of smokers in California’s Medi-Cal program nearly doubled from 738,000 in 2011–2012 to 1,448,000 by 2016, raising the proportion of state smokers covered by Medi-Cal from 19.3 percent to 41.5 percent. Compared with smokers with private insurance, those in Medicaid were more likely to have chronic disease and experience severe psychological distress. In 2016, 51.4 percent of adult smokers with chronic disease conditions and 57.8 percent of those in severe psychological distress were covered by Medi-Cal.

“The growing concentration of smokers in Medicaid highlights the need for more effective approaches to reduce smoking in this population,” said Dr. Zhu. “I hope this study captures the attention not just of public health officials, but also of their counterparts in Medicaid. Reducing the toll of tobacco in this population should become an urgent priority for all Medicaid programs and plans.”

In a cost-benefit analysis that assesses the economic impact of supplementing usual care of quitline services with mailed nicotine patches and financial incentives of up to $60 per person, investigators found that compared to usual care alone, offering these adjunctive services to Medicaid callers will reduce future healthcare expenditures due to increased number of quitters. This will produce a net savings within five years with a benefit-cost ratio of 1.18. The net savings will accumulate over time with a benefit-cost ratio of 1.90 over 10 years.

“Our study demonstrates that investment in an effective smoking cessation intervention for Medicaid smokers can reap large savings down the road,” stated Hai-Yen Sung, PhD, of the Institute for Health & Aging, School of Nursing, University of California, San Francisco, CA, USA. “Providing modest financial incentives and mailed nicotine patches to Medicaid smokers who call the quitline is cost-saving. For every $1 invested in these adjunctive services to Medicaid callers, there will be $1.90 savings in healthcare costs within 10 years.”

This research is part of a five-year, $10 million grant awarded to the Department of Health Care Services (DHCS) by the Centers for Medicare & Medicaid Services (CMS) in 2011 and was part of an initiative exploring the use of incentives to change health behaviors in the Medicaid population. This research was designed to accelerate successful quitting by: increasing use of a well-established and effective phone counseling service, the California Smokers’ Helpline (CSH); decreasing barriers to obtaining nicotine replacement patches; and offering economic incentives to encourage quitting.

“There is no single magic bullet to reduce the burden of smoking. The results of individual efforts, such as general or targeted mailings, free nicotine replacement therapy, referral to telephone quitlines, and financial incentives (all used in MIQS), as well as taxation, smoke-free legislation, and counter-marketing (all occurring in California as a backdrop to MIQS) may be relatively modest, but each contributes to driving down smoking rates. In the case of California, even a small percentage drop in smoking, when applied to almost 1.5 million Medicaid smokers, could save thousands of lives and millions of dollars,” concluded Dr. Schroeder. 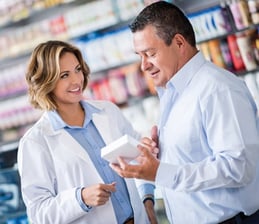 Stater Bros. Super Rx Pharmacy is committed to offering healthy living programs for its customers, such as FREE prenatal vitamins to expectant mothers during the upcoming month of May which is “Pregnancy Awareness Month”. Recently, Stater Bros. Super Rx Pharmacies improved their $4/$10 generic program by offering additional tiers. These tiers consist of an $8 and $12 offering and bring over 350 commonly prescribed medications to the program in order to add value for their customers.

The California Smokers’ Helpline (1-800-NO-BUTTS) is a free statewide quit smoking service, operated by the University of California San Diego and proven in clinical trials to double a smoker’s chance of success. The Helpline offers self-help materials, referral to local programs, and one-on-one, telephone counseling in multiple languages including English, Spanish, Cantonese, Mandarin, Korean, and Vietnamese. Specialized services are also available for teens, pregnant women, and tobacco chewers as well as for friends and family members of tobacco users. New services include online chat, a texting program, and a mobile app. For more information, visit www.nobutts.org.