Today is World No Tobacco Day

30 May 2017 | Geneva - Action to stamp out tobacco use can help countries prevent millions of people falling ill and dying from tobacco-related disease, combat poverty and, according to a first-ever WHO report, reduce large-scale environmental degradation.

On World No Tobacco Day 2017, WHO is highlighting how tobacco threatens the development of nations worldwide, and is calling on governments to implement strong tobacco control measures. These include banning marketing and advertising of tobacco, promoting plain packaging of tobacco products, raising excise taxes, and making indoor public places and workplaces smoke-free.

Tobacco use kills more than 7 million people every year and costs households and governments over US$ 1.4 trillion through healthcare expenditure and lost productivity.

Dr Chan adds: "But by taking robust tobacco control measures, governments can safeguard their countries' futures by protecting tobacco users and non-users from these deadly products, generating revenues to fund health and other social services, and saving their environments from the ravages tobacco causes."

All countries have committed to the 2030 Agenda for Sustainable Development, which aims to strengthen universal peace and eradicate poverty. Key elements of this agenda include implementing the WHO Framework Convention on Tobacco Control, and by 2030 reducing by one third premature death from noncommunicable diseases (NCDs), including heart and lung diseases, cancer, and diabetes, for which tobacco use is a key risk factor. 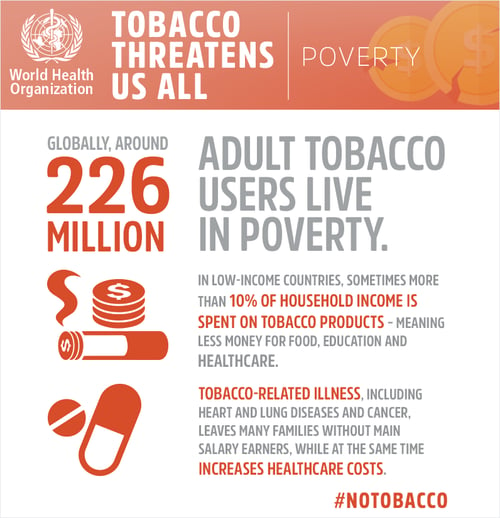 The first-ever WHO report, Tobacco and its environmental impact: an overview, also shows the impact of this product on nature, including:

Tobacco threatens all people, and national and regional development, in many ways, including:

World No Tobacco Day 2016: Get ready for plain packaging

Every year, on 31 May, WHO and partners mark World No Tobacco Day (WNTD), highlighting the health risks associated with tobacco use and advocating for effective policies to reduce tobacco consumption.

For World No Tobacco Day, 31 May 2016, WHO and the Secretariat of the WHO Framework Convention on Tobacco Control are calling countries to get ready for plain (standardized) packaging of tobacco products.

Plain packaging is an important demand reduction measure that reduces the attractiveness of tobacco products, restricts use of tobacco packaging as a form of tobacco advertising and promotion, limits misleading packaging and labelling, and increases the effectiveness of health warnings.

Plain packaging of tobacco products refers to measures that restrict or prohibit the use of logos, colours, brand images or promotional information on packaging other than brand names and product names displayed in a standard colour and font style.

Guidelines to Articles 11 and 13 of the WHO Framework Convention on Tobacco Control (WHO FCTC) recommend that Parties consider adoption of plain packaging.

Plain packaging builds upon other measures as part of a comprehensive multisectoral approach to tobacco control. Policy makers, civil society and the public can take action to ensure that their governments consider adoption of plain packaging.

Interest in plain packaging is progressing across the globe: